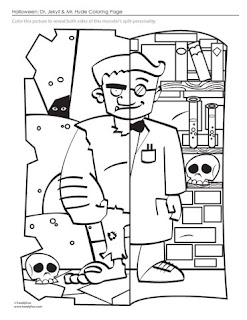 The other day, a Turkish friend of mine told me how he felt his personality changed when he spoke English. He said he became a much finer, more organized, elegant 'Mr. Know-it-all' (there is another word for that, one that fits better, but I shouldn't use it! ) I definitely know what he means. I have observed him arguing in English many many times and it really feels like there is another person, an English person speaking. It's not only his accent, it's also how his posture changes, the way he uses his hands and even moves his eyes.
Another Turkish friend of mine directly switches to English whenever she is in an extremely emotional state. She uses short, striking sentences to make her point. She looks like she wants to avoid the emotional pressure of her native personality by switching into another "language's identity". Even when she texts, she  uses English to make her point and even if you answer her in Turkish, she won't give up unless her emotional state is stable again (let's hope she won't mind me using the word "stable"!).
I can easily say that the same 'switch' applies to me. As a native speaker of Turkish, I can easily say that I, too, switch to English whenever I am under stress or in a tense situation. I have no idea why I do this, but, I can feel the urge to change into another person. It makes whatever I have to say easier to say probably because it seems to lift a barrier that might exist in my native language.
This phenomenon might especially be true for taboo and swear words. I know for a fact that many of my Turkish friends swear more 'comfortably' in English. Studies have shown that the emotional impact of a swear word in a second language is less than it is in the native language (studies here, here, and here).

In a study called "Blistering barnacles! What language do multilinguals swear in?!", Jean-Marce Dewaele (2004) mentions the Anglo-Candian born Nancy Huston explaining this phenomenon:

"Every false bilingual must have a specific map of lexical asymmetry, in my case it is in French that I feel at ease in an intellectual conversation, in an interview, in a colloquium, in any linguistic situation that draws on concepts and categories learned in adulthood. On the other hand, if I want to be mad, let myself go, swear, sing, yell, be moved by the pure pleasure of speech, it is in English that I do it" (Huston, 1999: 61)

After giving this example, Dewaele offers some insight into this situation:


"Huston’s testimony is backed up by psycholinguistic explorations and psychoanalytic case studies confirming that when a second language (L2) is learned post-puberty the two languages may indeed differ, with the first being the language of personal involvement and the second the language of distance and detachment, or at least the language of lesser emotional hold on the individual (Amati-Mehler, Argentieri & Canestri, 1993; Bond & Lai, 1986; Gonzalez-Reigosa, 1976; Javier, 1989; Pavlenko, 2002b). Altarriba argues that words that label emotion are represented at a deeper level of conceptual understanding in a native or dominant language as compared to a second language (Altarriba, 2000, 2003; Santiago-Rivera & Altarriba, 2002). Bond & Lai (1986) and Javier & Marcos (1989) show that codeswitching and the use of the second language may act as a distancing function, permitting L2 users to avoid anxiety-provoking materials and to express ideas in their L2 that would be too upsetting in their L1"

I have a Canadian friend who has been living in Turkey for at least 15 years. He has a Turkish wife and  a 10 year old daughter. His knowledge of the Turkish language can be best described as execrable (thanks to Gavin Dudeney for the word). He has always been an amazement to us. Whenever we witness his attempts to speak and understand the language, we try to understand how this is possible after so many years. When we asked him how he explained this "phenomenon", he used to shrug. I asked him again recently before I was doing research for this post. He agreed with my "switching personality" theory and said that he was just too stubborn to switch into this "Turkish" personality. He also describes himself as a reserved person who doesn't like to socialize too much.
At the other extreme end is another Canadian friend who has been living in Turkey for about 10 years and is also married to a Turkish woman. I met him 7 years ago. His Turkish, even back then, was flawless. Both his pronunciation and knowledge of grammar fascinated me and I wondered how this could have been possible only in 3 years. He said that he just learned it. What kind of a person do you think he is? He is very outgoing, has traveled to nearly every corner of the country on his own, has been invited into homes by Turkish families and sort of slipped into a  Turkish personality.

Now, how is this relevant to our English classes? It's this question that I ask myself after looking at these thoughts and examples that I have mentioned above: Is it possible that students who resist switching into another personality, a foreign personality one might say, have more difficulty in learning English than the ones who are more open to acquiring foreign thought patterns and personalities? I also want to ask if this might be relevant to students who are more conservative and distant to other cultures (especially Western cultures if English is going to be our example)? In my personal experience, I can easily say that this is true with the students that I have taught and observed.

How about your students? Are there students in your class who have negative attitudes towards anything Western and therefore reject a "personality" change and consequently end up having trouble learning English?
How about yourself? Do you become Mr. Hyde when you speak English?